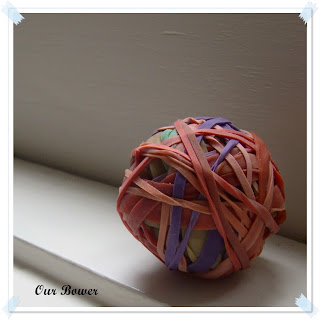 Do you remember the rubber band skipping ropes we made as children to play "Zero point" and those rubber balls that would bounce almost as high as the point at which they were dropped?  I do.  And when I googled zero point, it said it was a "traditional" game.  That made me feel old in an instant!

Anyhow, the tot is too young to play zero point and I had a lot of rubber bands.  So I thought, why not make a rubber ball with them?  So I wound rubber bands over one another repeatedly.  It's that brainless and easy.

The ball bounces quite well but I would highly recommend that you do not encourage any throwing - it hurts if you are hit with it!  And play with it outside.  The window can shatter from the impact.  It's that solid.
Posted by The Part Time Domestic Goddess at 6:16 PM

Email ThisBlogThis!Share to TwitterShare to FacebookShare to Pinterest
Labels: Craft, Games, Recycling, Save me some money

The Part Time Domestic Goddess
A mum and part time domestic goddess treading the fine line of a balanced life.