Play dough on a dime. 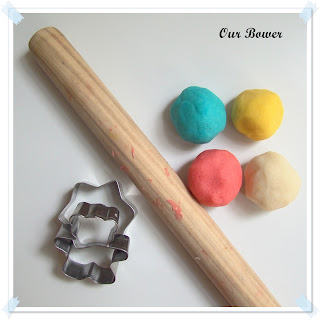 The tot loves play dough.  Actually, I haven't met a child who didn't like playdough. The texture of something squishing in your hands, the endless possibilities of the lump of dough and the bright colors are definitely a draw.  I like the idea that it exercises the little fingers and improves fine motor skills, works the imagination and best of all, engages the kid so that I can have a little time to do all the this and thats! 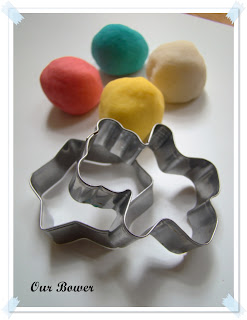 One thing I don't like about playdough is how they end up mixing together and becoming an ugly lump of dough.  Not that the tot actually minds.  But the OCD in me gets really annoyed.  And it would be so wasteful chucking that out and buying a new lot too! 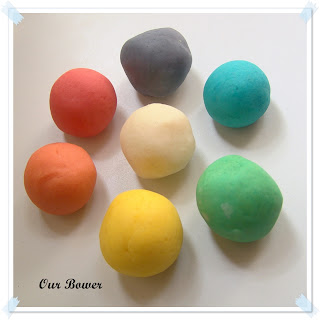 Also, dough does dry out eventually and get yucky with bits of this and that stuck in it.  And dough stuck on carpets or clothes are quite a pain to remove.  The biggest worry is the ingestion of the dough! 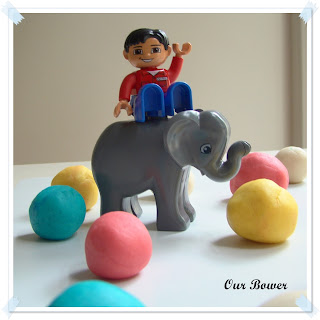 Which is why I LOVE homemade playdough.  Cheap enough to chuck when it's turned grotty, safe enough to be ingested and so many colors to choose from!   If it's stuck on clothes, soak the clothes and then the dough dissolves and you can rinse it out with no problems! 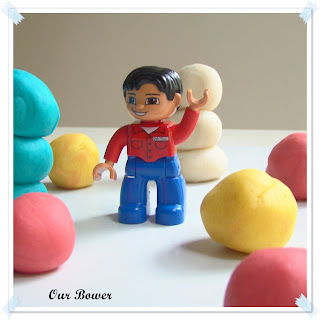 The sky is literally the limit with these things.  I bought a cheap rolling pin and a set of cookie cutters, added some plastic utensils and recycle some plastic food containers and the viola!  A cheap toy that entertains the little one for hours at a time. 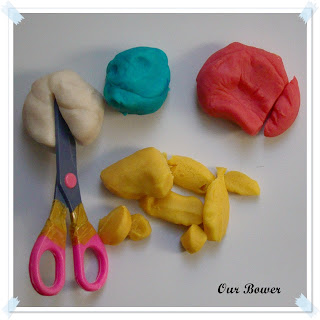 One other thing that I have found playdough to be particularly useful is in training the little one in how to use the scissors. I bought him a safety scissors that is made of plastic.  Unfortunately, it actually takes more skill than a normal scissors to cut nicely through paper.  However, with the playdough, no problems at all!  And he doesn't get himself nicked. 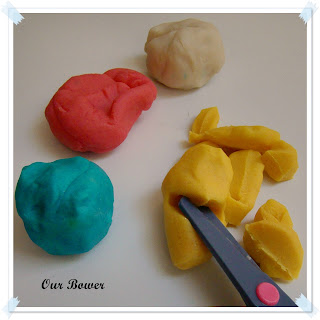 I'm hoping to teach colors using playdough and mixing them up. But seeing how the tot can't even consistently identify basic colors, I may have to leave it to later!

I've tried many of the recipes online and find that the cream of tartar version the best.  The recipe using baking soda and cornstarch resulted in a rather slimy afterfeel which I didn't like at all.  The "no cook versions" are largely similar to cooked versions seeing how boiling water is used. I use the no cook version as that allows me to involve the tot in the mixing.  He mixes with a wooden spoon in a huge mixing bowl and only after I've mixed the mixture enough to not have any liquid in the bowl.  The boiled version tends to result in a salt crust on the dough after a while so I don't really fancy that method either. 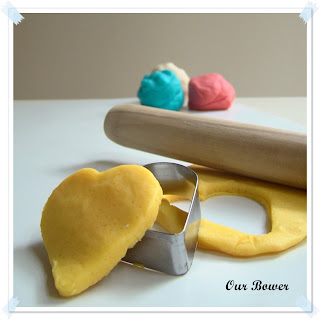 There are a thousand and one recipes online and this is the base recipe.  A lot of people add flavors and such to the dough and yes, they smell delicious!  But I don't.  There really is no need to encourage my greedy tot to mouth the dough with the delicious smells even if it's safe.

Here's the recipe I use!  Do you have any non toxic recipes for crafts for children?  I would love to hear from you!

Have fun!
Posted by The Part Time Domestic Goddess at 11:51 AM

Email ThisBlogThis!Share to TwitterShare to FacebookShare to Pinterest
Labels: Craft, Recipes, Save me some money

The Part Time Domestic Goddess
A mum and part time domestic goddess treading the fine line of a balanced life.